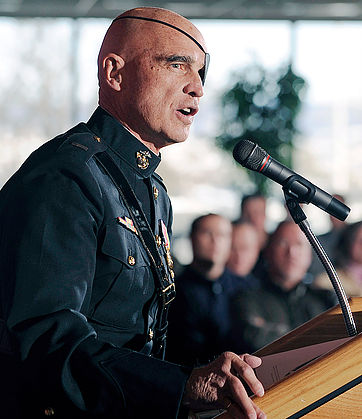 All men are welcome to join together on Saturday, January 25th for the 4th annual North Myrtle Beach Men’s Prayer Breakfast!!  Clebe McClary will be the guest speaker. First Lieutenant Patrick Cleburne McClary, III, USMC, Retired, known to thousands as “Clebe McClary,” is an American hero. During the Vietnam War, while some of his contemporaries were staging anti-war protests and desecrating the American flag, the Lowcountry native was serving as a platoon leader in the First Reconnaissance Battalion. On the battalion’s 19th patrol, the unit was attacked by the Viet Cong. Lieutenant McClary was seriously wounded, losing his left arm and left eye, yet he continued to lead his men. The numerous surgeries and long recovery period that followed could have taken a bitter toll, but he faced his rehabilitation with characteristic determination. In the years since, Lieutenant McClary has become a symbol of courage and hope to the many audiences around the world with whom he has shared his story. For more information, check out his web site.

If you are new to North Myrtle Beach or to Ocean Drive Presbyterian Church, come and make new friends!  But most of all, come join with men from all over North Myrtle Beach as we gather together before the Lord in prayer!  A love offering will be received.